When I was in college, it never occurred to me that I would be a professional writer.  I majored in art and in mathematics, but what I secretly dreamed of being was a simple illustrator or cartoonist.  Now, when I come up with movie ideas, they appear to me, not as loglines or one-sheets or even cinematic images. They pop into my head as drawings. So when I'm trying to get my head around a movie idea, I draw pictures. 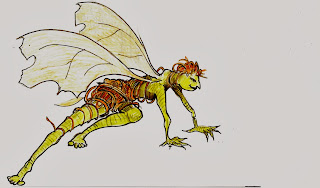 Many years ago, I kept imagining creatures that I called "imps." An imp is defined as "a little devil or demon; an evil spirit," but I saw them as the size of forest sprites, covered in bundled twigs, with wings like dry leaves. 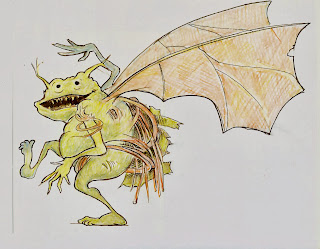 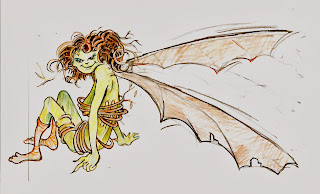 I imagined them infesting suburban backyards like termites or bees.  They didn't strike me as "evil" so must as mischievous, ill-behaved and playfully destructive.  They looked like the manifestation of every child's id, and I could see them coming by the thousands to wreak havoc on family homes.

This ultimately became a story about a group of children whose old house had become overrun with the creatures.  The kids try to drive the imps out, but when there are two-year-old sister is abducted, they have to venture into the Imps' hive to rescue her. 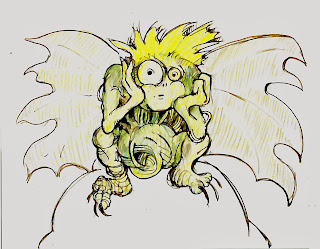 At the time I had just finished writing assignments adapting novels about serial killers, madmen, and demonic possession.  I think I was just in the mood to do something more playful lighthearted. 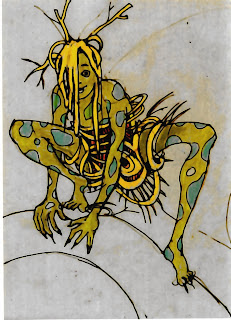 But the Imps kept changing form... 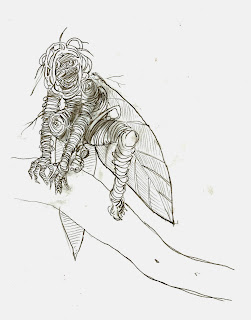 Suddenly, I was imagining them not covered in bundles of sticks, but actually composed of tangled vines and roots. 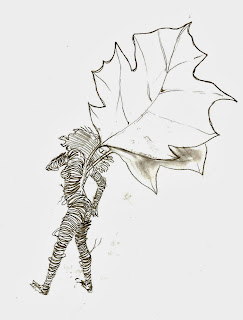 The tone of the story along with the pictures became less childish and playful, and more uncanny and complex. 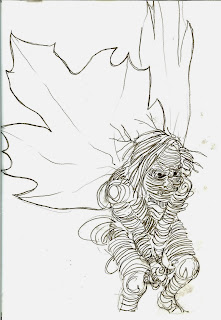 Now the story seemed to be about the brooding discontent of adults. The Imps seemed to represent the unacknowledged emotions and desires of the middle-aged.  These creatures would erupt in a swarm from the mud and tangled roots to wreak havoc on our safe, technology-driven lives. 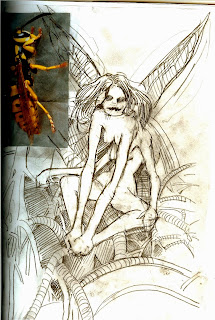 But the Imps didn't stop changing. The kept getting more and more disturbing.  They took the form of grotesque human-wasps.  So, the stories that these new pictures evoked kept changing too, becoming darker and more perverse.  Now, I imagined sociopathic entomologists breeding sick mutations in test tubes and terrariums, only to have them break out (as our creatures always seem to do) to take revenge on their creators.
However, just when I had this version of the Imps down in treatment form, the image unexpectedly morphed again - transforming into something altogether different. 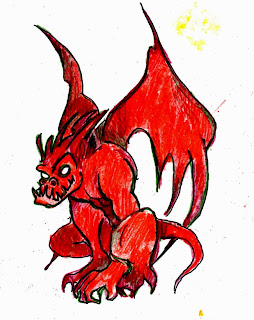 Out of nowhere, the imps were suddenly playful, mischievous, and "impish" again.  They looked more like little devils, and they were bright red. 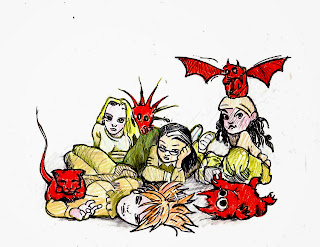 Now, I imagined a group of girls, young witches, who cast spells to invoke the imps.  Each Imp could perform a task, sometimes simple, like finding a lost iPhone, sometimes more complicated, like making a boy fall madly in love, and sometimes extremely dangerous, like raising the dead. 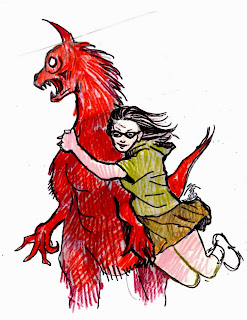 
I pitched all these versions of imps and more to various production companies, producers, comic book publishers, and networks.  None of the imps, in any of their various incarnations, were ever sold.  For years I hadn't thought about them,  but this morning I stumbled on the sketchpad packed with all the different drawings I have made over the years, trying to pin the imps down.

Alas, I could never quite get a handle on the little fuckers.  Perhaps it's just not in an Imp's nature to be pinned down.

My favorite imp of all the imps I found the sketchpad, was drawn by my six-year-old daughter (she's thirteen now) - the most mischievous, playful, unpredictable imp of all: 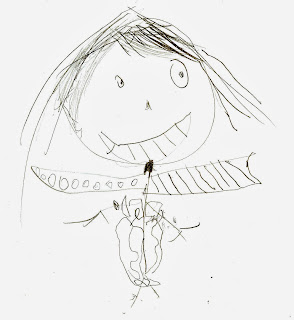 I write this blog in order to connect with intelligent, ambitious, and creative people. If you leave a comment, you will inspire me to write more. If you liked the article, please share it.
Posted by Sean Hood at 10:44 AM

Sea, you are uber creative! Keep drawing and dreaming yourself into a story that must be told!