Movies for Your Ears

My first treat at the LA film festival was a series of shorts that had no pictures.

At Movies For Your Ears: Making Pictureless Films, Jonathan Mitchell walked the audience through his creative process when creating the critically acclaimed podcast "The Truth."

As the festival program describes it, "The Truth...creates short films without pictures. Its crafted, colorful and diverse fictional stories don’t just compel the audience to listen, but to experience these tales as if you’re right there with the characters." Indeed, while listening to "That's Democracy" I had the uncanny feeling of actually being in a high school classroom when a class lecture takes shocking and violent turn. While listening to Sylvia's Blood, I swear that I saw the most disturbing and vivid imagery that I've seen all year while sitting in a theater with my eyes closed. Simple audio tricks evoked the identity bending and reality warping visuals of Philip K. Dick. There is a massive archive of other shorts to listen to on The Truth Website. 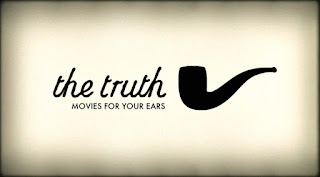 Here is my pitch for why screenwriters should bother to listen.

Good filmmakers pre-visualize their stories - cinema, after all, is supposed to be storytelling with pictures. Writers rarely refer to sound other than as dialogue or in the BOOM of an explosion. In film school, we learned that Eisenstein pioneered the juxtaposition and collision of images to create meaning. We talk about “seeing the movie” in our heads. Screenwriters rarely, if ever, think deeply about the layers, meanings, collisions and storytelling power of the movie sound.

Listening to The Truth, is a great reminder that right sounds (in actual movies, these are often played under dark, ambiguous or strobing imagery) encourages the audience to fill out the visuals in their imaginations, putting them in a deeply engaged dream-state. Well chosen sounds can evoke as much tension, deliver as much emotion, drive as much content as imagery.

I’d argue that the person best suited to pre-audio-lize the potential of story-sound is the screenwriter. In the same way that well-wrtiten characters give the actors meat to chew on, well-imagined sounds that are integral to the story give supervising sound editors an opportunity to practice their art at the highest level.

So turn out the lights, close your eyes, pop in your earbuds and give The Truth a listen. Later, ask yourself, "What does the movie or episode I'm writing SOUND like?"

For more on my love affair with cinema sound, read JUST LISTEN.
Posted by Sean Hood at 12:00 PM