Levin's Tips -- Rewriting (A.K.A. Welcome To The Rest of Your Life)

You wrote a script! Maybe it was your first! Let's get two things out of the way. Here's the first:

No, seriously. It's a huge fucking deal. I hope you're happy with it, but even if you're not... Remember: There was NOTHING on those pieces of paper/virtual agonizingly white screen of Final Draft and now there IS.

Revel in the miracle of that, friend! Last time someone did that, they wrote a bestselling book about him!

Oh, shit. Wait. There was also a second thing. Oh yeah. Now you gotta do a, GULP, a REWRITE. And, well, if you don't know what that looks like... 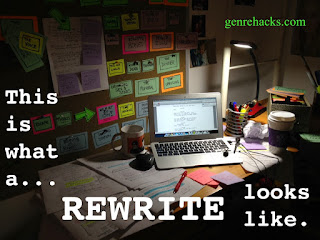 To some, like yours truly, rewrites seem like a labyrinthine process. Some people are creators, they are not fixers. They don't know where to begin. A blank page was blank enough, but how do you make a better marble statue out of the marble statue you have already carved? When you first carved it, there was nothing to destroy, it was just stone. Now it's a statue. Why should you risk destroying the statue you have so much time building?

Can't the marble statue you have already carved be good enough?

Chances are, it's not. In today's market, your screenplay needs to be A+ good to rise above the clutter. It's pretty, pretty rare for someone to write an A+ first draft. It's not impossible, sure, but then neither is winning the lottery.

The first draft of Back to the Future? Marty is a suicidal alien from Pluto! No, really.

The first draft of Birdman, the Oscar Winner? That last scene is pretty iconic, right? Emma Stone looks up, that ambiguity. I'm not the biggest fan of the movie, but there was something there. It at least reached for something ineffable... In the first draft: Last scene was Jack Sparrow and Johnny Depp talking about Pirates of the Caribbean 5.


In case you're still not convinced, BRUCE WILLIS WASN'T DEAD IN SIXTH SENSE until the 7th draft. YES. Sit with that for a second.

So, good. Glad to have you on board!


First steps are hard, especially if its your first time taking them. You look at your script now and you don't even know where to begin your rewrite journey. You need an anchor, a starting point.

Good news: It's already in your script. More good news: People will tell you.

You wrote this script from a starting point. Maybe that was thematic: You wanted to write about the injustices in the five different institutions of Baltimore. Or maybe you had a spontaneous image when you were walking down the street one day listening to Kanye West. Whatever it is -- an image, an idea, a memory -- there is a core to your idea.

And then you had to take that core and mushed it through the meat grinder that is your brain so that little letters and words can appear on the page. That core muddled a little bit, maybe. Some parts of it didn't turn out the way you wanted to.

Your anchor, your starting point, is that one scene where you fucking nailed that core. It's that miracle of a moment where, for a second, your vision is actualized. You point your finger at it and say: "This is what I wanted to write. This is my movie!" If you can't find it, the chances are the people reading your script can tell.

Hold onto that scene. It's going to be your key, your anchor. This is why Sean likens the rewriting process to an excavation. You're going to find your spot and dig deeper.

And you will do this in one of two ways. Either you're an Architect or you're a Gardener.


A Gardener writes from Inside Out.

They have ideas, memories, scenes and they shuffle them around, put them in a bottle and shake them until something special comes out. I saw Paul Thomas Anderson give a talk once and someone asked him: "How do you write?" He said: "I put two people into a room and make them have a conversation. Hopefully it's interesting. If it's not, then I put them in a different room. If it's still not working, I'll change one of the people. Maybe I'll change both."

The Poster Child for this method of writing is... George R. R. Martin.

The challenge for this kind of writer is usually molding the scenes and the tone of the script into a coherent, satisfying structure. This might end up forcing you to cut some wonderful character moments or even entire characters in order to write a screenplay. This is of course a maddening, cruel process but a necessary one.


An Architect writes from Outside In.

They build the World of the story first, then zoom into the scenes. They love charts and highlighters and cards and maps. They want to have the blue print before they start building the house. They know the ending before they start writing.

The pitfall for this kind of writer is to turn in stories that feel stiff. They tend to lean on their influences a bit too much when writing their first drafts. So, instead of the incoherence of a Gardener, an Architect might suffer from producing a work that is too predictable or perhaps with a tone too familiar to the movies that influenced it.

For those of you in our class, Sean is an Architect and I'm a Gardener. We deal with that dreaded Writer's Block different ways. He writes on index cards and re-composes his structure. I write fake reddit posts from the point of view of my main character and try to figure out what he or she should do in a scene. Different strokes for different folks.

Of course maybe you fall somewhere in the middle. That's alright too. Creative process is a fickle, schizophrenic thing. But knowing your process intimately will help you in the rest of your creative life. After all, in the class, we're not only learning writing as a craft, we're also learning HOW to write.

Alright, that's that for this week. Next week is going to be more about the nuts and bolts of it all (Story! Tension! Feedback!) as we dive deeper into the quagmire known as... Re-writing!