Over the course of 15 weeks I will be teaching "Writing The Feature Script" at USC's School of Cinematic Arts. Week by week I will be writing blog articles about each topic that we discuss in class. My hope is that beginning screenwriters, working screenwriters in writing groups, and screenwriting professors might benefit from "auditing" my class online.

This is a synopsis of Week Two.  You can read about our previous class here:  Writing The Feature Script: Week One - OVERVIEW

If you are indeed following this course week by week on my blog, and you want to get the most out of it, you need to do two things:  First you need to write a 1-2 page synopses of your story idea.  Second, you need to show that idea to at least three trusted people and get feedback.

Ideally, you would join, or create, a writing group.  Screenwriting isn't something learned by reading a book or a blog; it's a process of telling, retelling, and revising pages with continual feedback from one's peers. Involving yourself creatively in other writers' projects, giving notes and work-shopping stories besides your own is far more valuable than learning "writing theory."  In class, my USC students get is an intense, impassioned, and supportive engagement with their work by nine other ambitious and talented students (as well as the TA and the instructor) every step of the way.  You should seek that out as well.

Ultimately, all writers need a group of trusted collaborators, fellow writers, and filmmakers with whom they share feedback.  Whether your aspire to be Ingmar Bergman or Brett Ratner, Kathryn Bigelow or Maya Deren, you need your inner circle.

Last week, students uploaded their synopses to a Dropbox file so that they all could read one another's work.  Most of the ideas, at this point, were fragmentary.  Students had imagined characters, conflicts, and worlds that deeply inspired them, but now they needed to take a first shot at putting these ideas in the form of a STORY.

So, we discussed and evaluated each idea in terms of the simplest definition of a story that I have encountered: 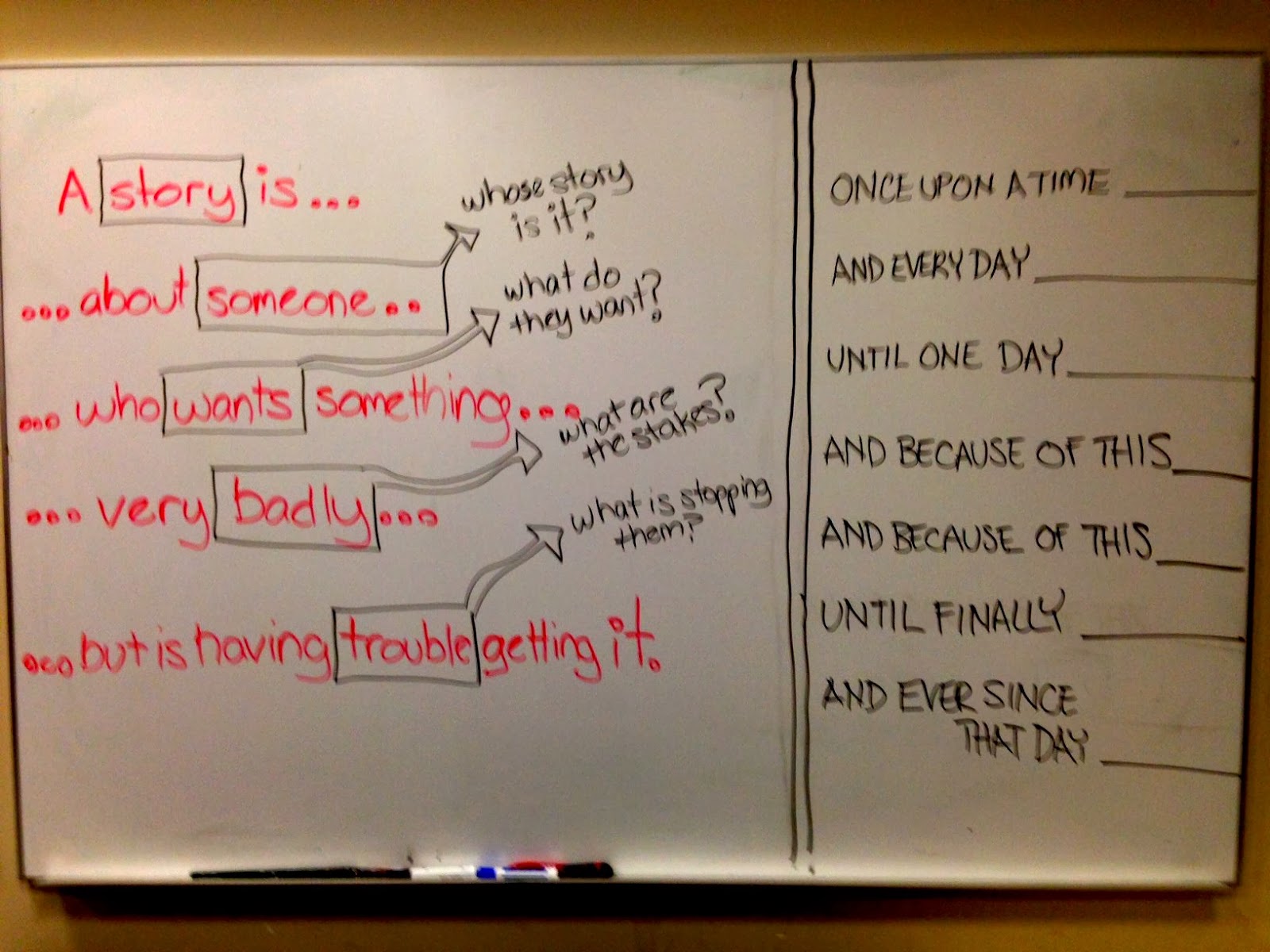 The last thing that we talked about was the idea of TENSION, which we will come back to again and again throughout the semester.  Good storytellers constantly engage the audience's emotions by orienting their attention to the future.  In the beginning of the story they stoke the audience's CURIOSITY by showing them intriguing characters and situations that they want to learn more about.  In the middle of the story, they lock the audience's attention by manipulating the audiences HOPE and FEAR: the audience HOPES that things will turn out well for the people they care about, and FEAR that things will turn out badly.  Thus, the audience stays in their seats waiting to see how things turn out in the end.

When I talk to script readers, producers, and judges in screenplay contests, they all say that most scripts fail because of two things.  Either we don't care about the characters (EMPATHY,) or the story lacks TENSION, or both.  It's a good idea to start thinking about these questions now.

In future classes, we will go over screenplay structure in a more detailed way. We will consider Frank Daniel's Sequence Approach, as well as other templates. However, at this point in the process, an over-emphasis on act breaks, reversals, culminations and climaxes can lead to weak plots and poor characterization... as well as a lot of anxiety.  It's better, for now, to look at structure more loosely.

Think of it this way: all writing manuals and screenplay instructors can offer are maps, but the maps are not the territory.  A screenplay is not something that you engineer according to rules or even principles. Your story is something that you discover, like an archaeologist searching for an ancient long-buried city. The maps give you some idea of where the ruins are buried, but you won't really know the structure until you start digging.  As you dig, you may change your mind about what you find.  What you thought was a central square could turn out to be an inner sanctum.  What you thought was the city gates may turn out to be the entrance to a temple.  Storytelling is not so much a process of creation as it is one of discovery.

Even The Hero's Journey or Monomyth, touted by screenplay guru's as the mystical template of all stories, will only give you a hazy abstract notion of the shape of your particular story.  As I've argued in the past, Real Myths are Weird.

Students left this week's class class with a Glossary of Screenwriting Terms, a list of  Recommended Books, Blogs, and Online Resources and a synopsis of Story Structure.  (click on the links to check these out yourself.)

Each student is now writing a 1-2 page Character Monologue or an Exploration of World.  Here are two examples of this exercise written by my students in the past.  The first is a wonderfully detailed description of a Taiwanese Hospital:  The World.  The other is a vivid monologue of a potential protagonist: Monologue. Notice how Lulu tells her story and the writer explores the character's voice, relationships, conflicts, and attitude.

These exercises underscore two different ways of exploring your story: inside out and outside in.  Actors who work "inside out" are generally start with emotions, senses and psychology- Method Acting - and work out.  Actors who work "outside in" begin with the expressions of the body, external details of character, and script analysis - Classical Acting - and work in.

Screenwriters are similar in that some of them seem to start with CHARACTER - emotions, situations and conflicts- and work out, to discover plot and structure. While others start with the WORLD -  the external circumstances and story structure - and then work in, to find the life of their characters.  No one way is "better" than the other, and there is nothing wrong with doing both. 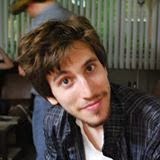 Lastly, I'd like to introduce my talented teaching assistant, Levin Menekse, who is primarily responsible for writing the glossary definitions, and will be writing guest blogs throughout the semester.  He hails from Turkey, reveres the writing of David Foster Wallace and the filmmaking of P.T. Anderson, and writes brilliant and mysterious screenplays.  He was singled out as "most likely to be a screenwriting professor" among graduate students at USC.


Click Here to go on to WEEK THREE:The Treatment.

I write this blog in order to connect with intelligent, ambitious, and creative people. If you leave a comment, you will inspire me to write more. If you liked the article, please share it.
Posted by Sean Hood at 12:28 PM

Thanks for this excellent post. A minor nit-pick: "hails" not hales" (in the intro to your TA).

Sean..
Great stuff! Thanks.
One question.. love the fairy tale steps and the Godfather example..but how does the Godfather fit into your one sentence simple story definition?

The Godfather is about a guy (Michael) who wants something very badly and is having trouble getting it.

Michael seems more like a reluctant hero.. when the film opens, what he wants is to NOT be in the family business. I guess one could argue that what propels him once his father is sick.. is to reclaim the family's place and power..but that is only at the end.

So how would you fit the Godfather into the simple definition of a story?

That's a great question Gina. What Michael wants very, VERY badly is to NOT "be a man like his father."

This is why he dropped out of college (against his father's wishes and joins the army.) But he keeps having "trouble" getting what he wants...

BUT, his father is shot, so he has to save his life by killing the man who did it.

He tries again to be his own man apart from the family by getting married in Sicily and starting a new life, BUT both his wife and his brother are killed in the mob war. So he returns to help his sick father.

He tries again to define himself as unlike his father... "as any powerful man, like a governor or senator," promising to get the family OUT of crime, becoming "totally legitimate."

BUT, his father dies, and his enemies plan to kill him, and so using those icy, independent, rebellious qualities that made him say "that's my family, not me," Michael kills all the other mob bosses, and becomes a man exactly like his father.