Structure is a tricky thing, because it's very easy to mistake the map for the territory. Some of the worst scripts I have ever read were perfectly structured with eight clear sequences, but they had no life to them. It was like watching a funeral procession made of eight little caskets pass by.

Unless you're self-financing your feature, your script will go through some readers and they will write comments to their bosses, or maybe to you directly. Here's a comment that no reader has ever written:

"I loved this script. It made me laugh, it made me cry. The characters are indelible and feel like real people. The ending fucking wrecked me. I hope this gets made by someone who understands the material, it might even be an Oscar contender. BUT I couldn't figure out where the sequence 6 started and ended, plus the mid point turn was unclear. So, unfortunately, I have to PASS on this script."

Your end game is to write something that moves people, makes them laugh, scares them, [insert emotion you mean to evoke]. It's not to write a "perfect" script. So, these terms and concepts are just tools for you to bring life to your script. Not the other way around.

Have you ever watched a movie and thought to yourself:

"Why is this plot even in the movie? Who cares about that bullet or whatever, go back to Batman!"

"What the fuck, it feels like this movie had 11 different endings! Oh wait, more Hobbits."

"Didn't they already introduce Deadshot? Why do we need a second and a third introduction?!"

"Oh wait, the movie just... ended? Really? I sat through this and it ended on... Joaquin Phoenix fingerbanging a sand woman?"

"Man, I really liked the first half with Seth Rogen and Adam Sandler, but this stuff with Eric Bana and the house is really dragging-- Holy shit, why is this movie almost 3 hours?!"

You should know about Structure because that's how you fix all these problems.

For example, what does it mean when a movie "drags"? It means your character has been following the same goal in the same way for a long time, and maybe you need to throw in a curveball. So, the solution is clear: Your sequence/act is running too long. Remember how we need to be switched up every other 15 pages? You didn't do that properly.

Structure is also a good tool to get to that honest, authentic place where you evoke the emotion of your audience. For example, Community and Rick and Morty are deliriously anarchic and it might feel inconceivable that they are actually really tightly plotted... but they are. 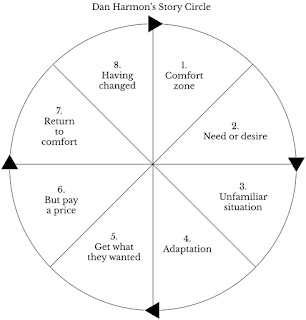 So, I know this has been especially on the esoteric side of things but, to me, the Structure part is pretty clear: Keep your audience engaged, 15 pages at a time, build to a First Act Ending where your audience has that "Here we go!" feeling, throw them a curveball at the Mid Point they didn't expect that either focuses your movie or diverts it in an interesting way, then hurt your heroes until they bleed and are forced to change as the Second Act Ending comes in... and build to a satisfying Resolution that addresses the themes you worked through in your story.

So, yeah, do that friend, and you're golden!

See you next week with a discussion about Plot and how that fits into the scheme of things!
Posted by Unknown at 11:50 AM

This is so true. I watched "The World's End" yesterday. 10 out of 10 movie...until the ending ruined it all!