What does Transformers 3, The Godfather and Dude, Where's My Car have in common?

Let's break that down, shall we?

"A story is... about someone..."  Whose story is it?  Through whose eyes, and more importantly through whose emotions do we experience the story? Who takes the actions that drive the story forward? This is the first big choice the storyteller must make, and there is always more than one answer.

But why? What happens if you bungle this up? 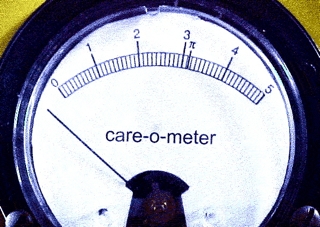 Cinema is a visceral medium. 99 percent of the time, whether we like a movie or not depends on whether we gave a shit about the people/animals on the screen or not. Imagine the TV Show House if House wasn't interesting, would anyone have watched it and thought "Oh my, look at all those fascinating medical mysteries!" The intellectual component of it is definitely a part of what makes a story tick, but unless you have lovable characters/engaging situations, it's tough for the audience to care. Think of how your non-film-school friends/family members talk about movies. "I love the Joker, he was so fun! He was the best part of the movie!"

The Care-O-Meter is a tool we use in the class to help you identify which parts of your script are "cooking" and what parts are "falling flat". For example, you might discover people really care about those supporting character you have, and maybe you should bring him/her more up to the forefront of your story. Maybe people are really not feeling that funny set piece with the lions running around the circus.

What can you do to fix this?

You've probably had this experience: A character is about to do something and you want it to succeed so badly. You're FEARING he/she is going to fail, you're HOPING he/she is going to succeed. Best movies evoke this in us and no matter how complicated they may seem, they can be traced back to that very simple "Someone wants something very badly and has trouble getting it!"

12 Angry Men: You're desperately hoping the Juror 8 is going to convince the others and fearing that the accused young man is going to be hanged/go to prison for the rest of his life.

Why did I choose this film specifically?

Of course not all tensions are life or death. But if you write a romantic comedy, you better make sure that we HOPE love will bloom between your central couple and FEAR they're not going to make it. The trick is go deeper instead of bigger. Whiplash, for example, makes you care about whether if a kid is going to become a jazz drummer or not SO MUCH that the entire movie feels like a heart attack.

Look at your script. Is there a way to heighten the audience's engagement with your story? Perhaps your antagonist isn't strong enough, so we don't FEAR that much. Perhaps your character doesn't seem to want that much from life, so we don't HOPE that much either. 90 percent of script problems can be boiled down to this Tension/Hope/Fear triangle.

And next time when you talk about your script with someone who has read it, pay specific attention to how they feel about it emotionally. Ask them where they felt most engaged and where their Care-O-Meter hit zero. This is essential for you to pinpoint the problem areas and the strong elements in your script!

On that note, feel free to check out some tips on How To Take and Process Feedback and How to Give Feedback.

For more on finding the story, check out Writing The Feature Script: Week Two - Finding The Story

For more tips from Levin, check out Rewriting (A.K.A. Welcome To The Rest of Your Life)

See you next week!
Posted by Unknown at 8:43 AM