If you are interested in going to Visionfest at the Directors Guild of America, please click the link and buy a ticket (It's a fund raiser), or contact me directly at seanbhood@yahoo.com and I can get you in.

A Filmmaker's Life: Final VisionFest Reminder
Posted by Sean Hood at 11:33 AM 1 comment:

Melancholy Baby - August 20th at the Directors Guild Of America

About 15 years ago, I was one of eight founding members of the non-profit film collective Filmmakers Alliance. Now the group has over 400 members and has made hundreds of films.

This will be our 11th Year presenting VisionFest, Filmmakers Alliance annual screening and celebration held at the prestigious Directors Guild of America Theater Complex - regularly attended by overflowing audiences, celebrity filmmakers, and press.

It begins with the presentation of the Vision Award to an established filmmaker whose artistic ambition and excellence inspires emerging filmmakers around the world. Past recipients include MIke Figgis, Terry Gilliam, Wim Wenders, Allison Anders, Alexander Payne, David O. Russell, Werner Herzog, and Mark and Michael Polish.

The presentation is followed by the Los Angeles Short Filmmaking Grant, an award that I won two years ago. And that is followed by a program of the best short films produced through Filmmakers Alliance in the previous year. This year, my film "Melancholy Baby" will end the the program.

The evening finishes with an elegant but high-energy party in the DGA lobby catered by some of Los Angeles' best restaurants. So go to the Filmmakers Alliance website, buy a ticket and COME!

I'm completely deaf in my left ear. Besides giving me a reputation for being "aloof" or "shy" at cocktail parties and noisy restaurants, my shoddy monophonic hearing has inspired in me a peculiar fascination with cinematic sound design. Perhaps it's only in movies that I can actually hear everything I need to hear. Maybe having only one working ear has made me more aware of sounds and how they color my emotional responses to what I see. Both my parents are musicians, so it might be that I experience all cinematic elements - color, movement, shape, plot, dialogue, effects, and so on - as a kind of music. For whatever reason, I don't just like to watch; I like to listen.

David Lynch is often praised for his surreal imagery. But, the next time you are watching one of his films, try closing your eyes. You will hear ominous roars, churning machines, the laughter of children, gushing liquids, and ripping metal. Now open your eyes and see how these disturbing sounds are juxtaposed with with images of a family dinner, a parking lot at Denny's, a smiling starlet, or a simple cup of coffee. Lynch's pictures are strange, but they are genius, in my mind, because of the sounds he marries them to.

The opening dream sequence in Bergman's "Wild Strawberries" is built with long moments of eerie silence punctuated by the shrill cry of a horse or the creak and snap of breaking wood. Remember the scene in which Michael Corleone shoots Sollozzo and the Police Captain? Watch the scene again and listen to how Michael's growing anxiety about the murder he is about to commit is revealed by the squeal and thunder of a nearby elevated train.

The image is presented to our conscious mind, but sounds work on the unconscious. This is why bad sound can ruin an otherwise compelling independent film - it's the annoying buzz that won't let us sleep when we aught to be dreaming. So, with this in mind, when I make films I spend a lot of time thinking about sound, even while writing the screenplay.

"Melancholy Baby," my short playing and this year's Visionfest tells the story of an agoraphobic man who falls in love with his neighbor by listening to her movements through their shared wall. The film is still in process at the time of this writing, but for me, it will be all about what the audience hears. Through the wall, he listens to her crying, coughing, walking, pleading, singing, and having an orgasm. We experience his loneliness through the groan and churn of an air conditioner. the gurgling pipes, the ring of tiny objects sorted into jars, and his nervous fingers tapping out a rhythm as loud as a drumbeat. These sounds are not "realistic." For him the world outside is an intimidating roar of birds, crows sounding off like air raid sirens. The audience hears the sounds as the main character feels them.

In order to get the sounds I wanted, I spent an entire production day "shooting sound" on the locations, recording everything from dog barks to footsteps, laughter and weeping. It was my only day as a director that I called "action" with my eyes closed. 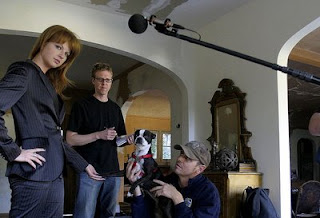 Most of the time, of course, sound is just there to support picture, like Tonto or Sancho Panza. Most people think the sound is good if the dialog is clear, the music is catchy, and the explosions are loud. But for me, it's more than that. For me, one of the best parts of experiencing the most dynamic and power visual medium of all time... ... is listening.
Posted by Sean Hood at 9:56 AM 4 comments: