An Intro To Narrative Video Games
Or
"How To Start Playing Video Games and Enjoy The Hell Out of This Beautiful Medium."


Video Games have always fought an uphill battle for legitimacy. Roger Ebert famously said they were not art. Even now, I meet people who flat out dismiss them as "stupid" or a "waste of time".

Here are some reasons why I feel that way and, if you have never played a video game, how you can get into this beautiful medium. But first, let's get something out of the way:

YES, MOST GAMES ARE TERRIBLE AT STORYTELLING

Most Video Games use story as an excuse to get to the explosions, rather than using explosions for the service of the story. As a young medium with a young audience -- not to mention crazy expensive development costs that require them to cater to the most common denominator -- most games are focused on spectacle rather than an emotional experience.

Now that's out of the way-- Why Games?

Screenwriters are familiar with the note: "We need to be in her shoes in this scene!"

That is short-hand for: "We need to empathize with the character." Remember your favorite movie-going moments, you probably felt like you were right there. You knew what the character was feeling, you empathized with his/her plight or a terrible choice s/he had to make.

But saving the world sounds abstract, right? It's too big, it's hard to care. Well, how about deciding whether your friend should go to police after possibly being raped?

In Life is Strange, your friend Kate comes to you for help. During a party, she lost consciousness. A student named Nathan Prescott walked her back to her dorm room and probably raped her but she has no proof. On top of this, Nathan comes from a prestigious family and you know that if she accuses him, he's going to lawyer up and destroy her life. You know the police are going to accuse her of lying and she already seems incredibly fragile and she asks you: "Should I go to the police?"

Imagine this moment in a TV Show. Perhaps that's the wrong answer and Max (the character you're playing) is going to suffer the consequences. But, in a game, you will. And it will hurt.

We have another saying in the screenwriting trade: "Choices reveal character." As in, if you want to find out what a character is really made of, then put them in a bad situation. Give them a really difficult choice and their choice will reveal who they are.

In a game, you will reveal to yourself who you are.

A NEW WAY OF STORYTELLING

We are all familiar with the Murder Mystery trope. Someone is dead, there are suspects, the genius detective figures out how it happened, yada yada...

Her Story is a video game where you're the one trying to figure out the mystery. It looks like this: 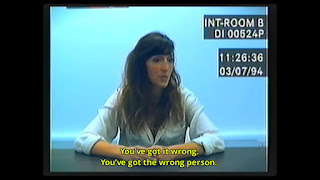 What you can do, as the player, is write in keywords into the video archive. With correct keywords, which are essentially clues, you will unlock more videos and get access to more of the narrative.

By connecting one clue to the next, you untangle a web of mystery. The gameplay is deceptively easy as it simply consists of putting the player typing one word after the next, but the rabbit hole is deep and you will get lost in the where/when/who and why.

The resulting experience is thrilling. Not only because you are put into the seat of the detective and have your "a-ha!" moment, but because the way the narrative unfolds is so unorthodox and unique. It's not linear or even non-linear. It's interactive, which is an element only a video game can provide.

Her Story also excels as that "empathy" part. It has a few tricks up its sleeve as to who you are.

It's tricky to make the gameplay enhance the narrative, just like how it's tricky to make the big action set pieces in a blockbuster serve the story and the character. As a result, most games, even those with amazing stories, are guilty of separating these two elements. You siege a castle, then get treated to a video of your character having a dramatic moment, then queue a fight scene, followed by another character moment and so on. The gameplay itself has trouble complementing the narrative... Except in some cases, the developers have found a beautiful way to merge them together.

In Last of Us, the gameplay itself serves as subtext. You play as a man named Joel who is escorting this young girl named Ellie across the country during a Zombie apocalypse. Joel has lost many people in his life when the shit hit the fan and he now actively resists talking/taking care of Ellie. He knows the less he cares, less it will hurt when he loses her again.

The Last of Us's game play consists of the player acting as Joel and defending Ellie against countless varieties of zombies and scavengers. (In true Walking Dead fashion, it's always the latter that's more dangerous.) So, despite Joel actively trying to avoid forming a bond with Ellie, the game play is all about building that bond. Ellie doesn't know how to swim, so you pull her along wooden rafts. She is short, she can't climb certain obstacles, so you help her up. Sometimes, you save her from the grasp of a terrifying zombie. Sometimes, she saves you.

Thus, the game play has genuine meaning and complements the narrative perfectly. Rather than telling you, it shows you how the bond between these two characters develop.

SO, WHERE DO YOU START YOUR JOURNEY?

If you have never played video games but you are curious, I super-duper recommend the three games I mentioned above:

Her Story doesn't require a strong computer and it's pretty cheap (it's 6 bucks online!). The gameplay is really easy to get into as you really just type in words into a screen.

Life is Strange is a longer game divided into 5 chapters. All five chapters cost around 30 bucks and you will need a good-ish PC or a gaming console to play it. The game play is on the easier side. It could be the very first video game you play and you will adjust to it pretty quickly.

It has a rather weak beginning (due to French writers trying to mimic American Teenager Slang that, thankfully, diminishes as the series goes on) and sort of a wobbly ending BUT playing it is completely worth it. It's emotional impact is almost unparalleled.

Last of Us is the perfect game. It has a better story than 99 percent of the movies/books/tv shows out there and really shows you what games are capable of. It's violent but not gratuitously. The only downside is that it's exclusive to PS 3 and PS4. And the gameplay is a bit more demanding than the two above, but if you're keen on figuring it out, I'm confident you will.

If your child/friend has it, simply borrow it, go to a dark room and play the beginning of the game. Trust me, it will be worth it.


And that's only the beginning. There are other beautiful, affecting games out there.

But for now, that's my 2 cents on this subject. I hope you enjoyed reading this post and maybe you will give gaming a chance. I am excited for you!
Posted by Unknown at 9:19 AM No comments: