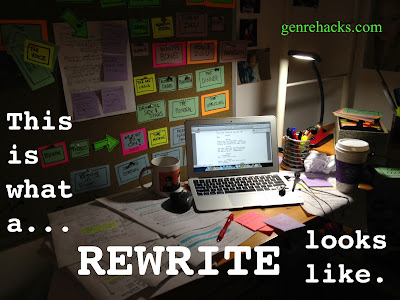 What is the most important screenwriting tool?  (originally I answered this question on Quora)

For me, a "tool" is some process, habit or approach that can be taught. When I work with screenwriters at USC's School of Cinematic Arts, I can't help the students with talent or luck, which are by far the two most important factors in a screenwriter's success.

Likewise, I can't really teach imagination, stamina, or even self-delusion (important as they are). Practical knowledge of industry standards as well as willingness to listen to honest feedback are certainly necessary, but I expect both of these when a student walks into the classroom or an aspiring screenwriter asks me for advice.  What I can teach is a process. 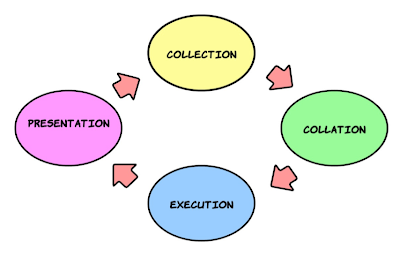 Anyone who takes screenwriting seriously must commit to a continuous, circular process of collection, collation, execution, and presentation.  As the saying goes, "all writing is rewriting."

This process seems to work best in the context of a class, writers’ group, and/or group of trusted collaborators and fellow filmmakers. The strategies we go over in class are meant to be applicable to any professional and/or personal project a writer might encounter.

In this phase the writer must be extremely open to ideas. When first looking for stories to tell, he or she must write down any an all impressions, images, jokes, fragments, and half-baked schemes that could be the seed of a film. Whether the writer collects ideas in a paper notebook, a smartphone app, or Evernote, he or she must collect everything. I liken it to carrying around A Bucket and picking up and collecting anything that is shiny or odd.

In later cycles of the rewrite loop, collection is the phase in which a writer patiently collects every note, suggestion or criticism he or she gets from people who have read the current draft (sometimes producers, executives or directors.)  Some notes will seem helpful; some will seem unhelpful.  Some will be exciting and others infuriating.  The key is to collect them all patiently and without judgment.  Write them all down.  Treat every single note as a gift, one that will be unwrapped and examined sometime later.

When first starting a screenplay, the collation phase involves sifting through all the ideas collected in notebooks and "buckets." Which ones have potential? Which ones trigger excitement? Which ones keep the writer up at night?  "Collation" is a more focused and analytical step in the process, in which the writer uses knowledge of structure, tension and characterization to build the armature of a complete story.


In later cycles of the rewrite loop, collation is the phase in which the writer takes all the notes received from readers, collaborators and/or employers and sifts through them all. Too often beginning screenwriters either accept every note they get without question, or stubbornly refuse to take any at all. A veteran screenwriter does neither.

Instead, the veteran organizes notes according to character, structure, tone, and clarity.  He or she looks for notes that come up repeatedly for every reader, and notes that some catch but most miss.  Rather than reject suggestions that make the her bristle, the writer looks for deeper meaning behind the note.  If the readers aren't getting what was intended, does something earlier in the story need to be clearer?  Does plot complexity need to be simplified?  Are the readers tracking the main tension?

Conversely, rather than take a note that initially strikes her as clever, the writer must ask herself if the change might require further adjustments throughout the script, perhaps creating more problems than it solves.  I often tell students to look for notes that are contradictory - some people suggest one thing and others suggest the exact opposite; this usually indicates they simply haven't made a strong enough choice somewhere earlier in the screenplay.

Ultimately, the writer comes up with a game plan for the rewrite. This often takes the form of a new beat sheet or treatment to organize all the changes. I like to use colorful index cards and map out the entire revision on a 5'x5' cork board on my office wall.   Did you think you only had to do this once?  No, you do this for every draft - for every loop of the cycle.

This is the part that involves a lot of typing, coffee, and returns to earlier steps. The writer pounds out the draft based on all the notes and ideas he or she has collected and collated. The writer keeps at it until it is in good enough shape to hand off to his readers.

In a classroom or in a writer’s group that is focused on a rewrite of a first draft, we generally break down a draft into pieces: either eight sequences, or four acts. We execute these rewritten sections weekly or bi-weekly, and share them with the group.  However, in professional situations it's better not to show work-in-progress to producers or studio executives, until there is a complete draft.

This could mean handing in the script to a professor, delivering the script to a studio, passing it out to a writer's group, or just showing the pages to Mom. The important thing is that this should be the writer's best attempt at a "finished" draft. But alas, no script is ever finished. The writer will get notes, and return to the collection phase as she gets more and more feedback...

This Rewrite Process begins with the first draft and goes on with the second and third.  If the writer gets a manager or agent, they will also get notes.  If the screenplay is optioned or sold, the buyers will have additional thoughts and the cycle continues.  If an actor or director is attached to the project, they will have new suggestions.  As the project goes into pre-production, adjustments and compromises will need to be made due to budget, schedule, unforeseen opportunities and unmitigated disasters.  As the project is edited and re-shot in post, further changes must be made.  The script will likely go through rewrite after rewrite, churning through the cycle, all the way up to the premier. 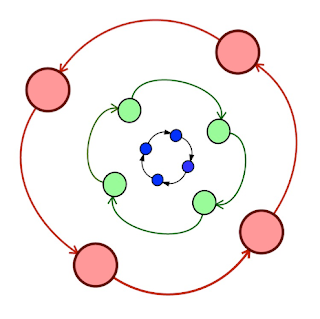 Screenwriters collect ideas while in the shower, driving their car, or reading the paper. They collate these ideas, sift through them and mull them over in their offices. They execute and present these ideas to friends and collaborators, usually over drinks and coffee and get feedback. They always have a bag of ideas brewing.

These ideas are developed into Pitches and Treatments.  These too are distributed and rehearsed, tweaked and re-imagined, presented to buyers and collaborators, only to get more feedback and more loops in the cycle.

While ideas are brewing and pitches are performed, the writer is simultaneously polishing and rewriting completed drafts, hoping that just a few more turns of the wheel will make it good enough to sell.

Simultaneously the writer is working on projects that are actually in production. These could be short films, indie features, webisodes, or the current episode in a TV series. These projects are getting feedback from producers and directors and unit production managers, and the script is changing to fit the reality of filmmaking on the ground. 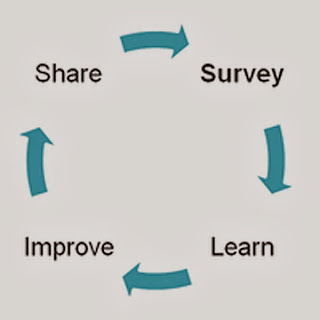 An article Wired Magazine, Harnessing the Power of Feedback Loops, suggested that feedback tools can be used to make just about any human activity more effective.

But as I am only a screenwriter, not an engineer, a psychiatrist or a cognitive scientist, I'll just leave with 20 Great Writers On The Art of Revision.

I write this blog in order to connect with intelligent, ambitious, and creative people. If you leave a comment, you will inspire me to write more. If you liked the article, please share it.
Posted by Sean Hood at 8:50 AM

This is great.
Just missing two parts of the loop, the one where you lose all hope and the one where convince/delude yourself into giving it another shot.
Or does that go away with time?

Drew: Alas it does not go away with time. Convincing/Deluding is an important skill - often involving gratuitous napping.