The Dangers of Success: Isolation and Loneliness

So many us dream of winning an oscar and getting hired to write our ideal movies, but when success means becoming "isolated, frustrated and lonely" - cut off from our closest circles of friends, family and collaborators - it can deadly.

In my last post on Creative Tribalism, I argued that " the absence of a closely knit tribe is precisely what is missing from many "successful" artist's lives. Without these relationships even superstars can become just as depressed, alienated, and unfulfilled as anyone else."

The cover story in a recent Hollywood Reporter was a grim reminder that regardless of whatever opportunities or success come to us, we MUST stay interconnected.

"Malik Bendjelloul, by all accounts, stood out as exceptionally talented, creative and for the most part also happy and well-adjusted. Over the course of the past several months, however, friends say he also had become increasingly lonely and isolated. The Oscar win had catapulted him into the upper reaches of the New York and Los Angeles art worlds, away from his best friends and family"

"Writing for movies was harder than Bendjelloul had anticipated, and he apparently had grown frustrated and anxious. He developed insomnia while in New York. He also had lost touch with some of the people he had been closest to in Sweden and confessed to at least one close friend that he felt lonely."

Oscar to Suicide in One Year: Tracing the 'Searching for Sugar Man' Director's Tragic Final Death. 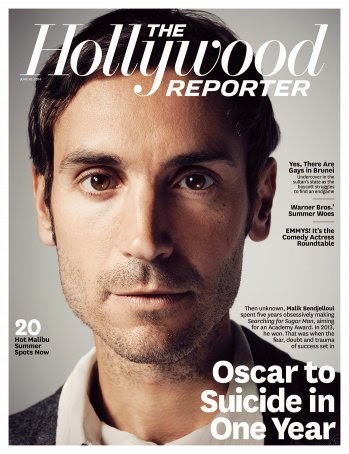 I REALLY REALLY wanted an Oscar when I was in high school. And a friend asked me "would you do ANYTHING to get one? ANYTHING?" As much as I wanted one, I remember telling him I wanted an Oscar, but I wouldn't want to have to be alone to get one. This is very tragic - by all accounts he should have been on top of the world. But being on top of this world doesn't always do much for our inner world, does it?

I think it was David Foster Wallace who said "The worst thing that can happen to an artist is to become famous before s/he's 40."

This might be a shaky observation, but the most enduring artists who became famous when they're young seem to be ones who have had "tribes" to grow with. People like Linklater, Kevin Smith, Tarantino who had frequent collaborators.

Another half-baked hypothesis: Are directors/film-makers less likely to go down this bad road compared to artists of other persuasions that are more individualistic in nature? I can't seem to think any major director/film-maker who committed suicide other than Tony Scott (and his suicide seems to have been motivated by cancer). On the other hand, I can think of many novelists/poets who took their own lives. The discrepancy could definitely be due to the youth of filmmaking compared to writing, but maybe I'm onto something? I don't know.