This is a summary of my lecture notes for WEEK 1 of Rewriting The Feature Script, which I teach at the USC School of Cinematic Arts.

First, you must surrender yourself to the rewrite process, an ongoing cycle of feedback and revision that I outlined in the post This Is What A Rewrite Looks Like. I know you kinda hoped your first draft was pretty close to the final draft. It's not. Don't believe me? Try this... 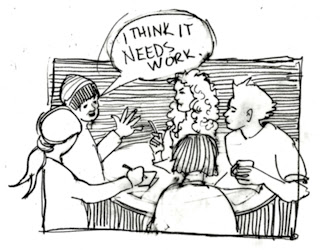 These collaborators could be the other students in a class or the other members of a writer's group. They could be your agent, manager, and attorney. They could be the actors, editors, cinematographers and producers in an online group like Filmmaker's Alliance. The key is that these collaborators have some experience reading scripts, that you trust their judgement, and that they have good reason to put in the time and effort. This "good reason" is often just your willingness to give feedback on their scripts in return.

As you are listening make sure that you write down ALL the notes you get, even the ones that you don't agree with and especially the ones that seem to come up again and again. You'll collate and sift these notes later, but for now just gather as much feedback as you possibly can. If you can, find a perceptive and sensitive person who is willing to type up written notes, you've struck gold.

(For an expanded discussion of how to receive notes in a productive way, check out Getting and Processing Feedback. Then when you are in a position to give notes on other people's screenplays, check out How to Give Feedback.) 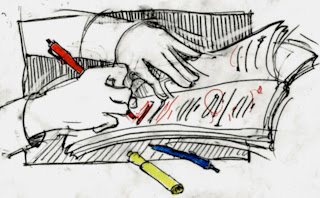 While other people are reading your script, print out a hard copy and sit down in a quiet place where you won't be interrupted for 2 hours. Re-read the script from beginning to end. While writing the first draft, we often are so focused on individual sequences, scenes and lines of dialogue that we lose touch with how the entire story plays over the course of 100 minutes. Use colored pens and highlighters to annotate the bits you want to revise later.

After you've re-read your script in one sitting, it's a good idea to ask yourself some tough but important questions. You can find examples of these questions in our handy Rewrite Questionnaire. 95% of feature screenplays submitted to festivals and contests, as well as to agencies and managers, fail in three areas: Character, Tension, and Development. Our 20 questions will help you focus on these areas as your rewrite. 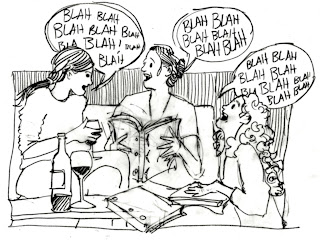 If this is your 2nd or 3rd draft you may want to get a bunch of actors (or just people who are good at reading out loud) and have a table read. Feed your guests lots of wine and snacks as they read; make a party out of it. Actors especially are not shy about giving feedback, and you may very well learn more about your script in one night than you have in months.

Once you are finished gathering lots and lots of feedback, you are ready for the next step...

(For my WEEK 2 lecture and the next step in the rewrite process, check out Rewrite: Revisit the Story)

Thanks for yet another insightful, practical and clear post. I'm really grateful for your work on this blog; it's always been a big help for me.

Perhaps one day you'll assemble all this into an ebook? Or an actual book??

At some point I'll put all this together into an e-book, but I still have a lot of content I want to write about first.

Most authors should return to and enhance what they have composed and script rewrite until the point that it genuinely addresses their issues and obviously their vision of what the script ought to be. It is uncommon that any author will paraphrase of a script without any preparation in only one sitting. A script rewrite, in any case, can be a protracted and troublesome process so you do need to consider precisely how you will go about it or ask for help. The same goes for anybody that will utilize a script, they may have an alternate vision to the first creator and need to adjust the first script to give them what they are searching for.