Short films are not mini-features, and some of the screenwriting tools we associate with features - Three Act Structure, Save The Cat Beat Sheets - don't necessarily apply to pieces that are 2-7 minutes in length. However, there are other tools that are powerful and useful - at any running time - for heightening emotional impact as well as creating unity and cohesion.

In Week Three of "Writing The Short Film" at USC's John Wells Division of Writing for Film and Television (that's our new name btw), students are writing short scripts around the prompt, "Preparation for a Date or Significant Event." The idea is to explore three concepts:


In The Tools of Screenwriting, David Howard writes, "A 'plant' is a preparatory device that helps to weave the fabric of the story together. It can be a line of dialogue, a character's gesture, a mannerism, a prop, a costume, or a combination. Later in the movie, when the circumstances have changed, there is a "payoff" in which this line, gesture, prop, whatever, is repeated and takes on a new meaning." 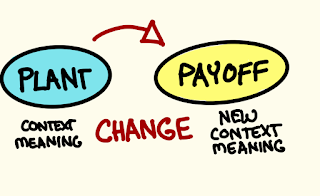 As you write short scripts, you should look for opportunities to introduce an object/dialogue/activity and then bring it back later in a different context, infusing it with new a meaning, one that tells us something essential has changed for the characters. Some examples...

An object/prop plant and pay-off: In Sideways, a wine bottle dated back to 1961 is introduced as one of Miles’ most prized possessions. He looks forward to drinking this wine at a special occasion. Later in the movie, after he has been to his ex-wife’s wedding and realized she will not get back with him, Miles ends up drinking this prized wine in a McDonalds by himself, from a cheap plastic cup.


In Screenwriting: The Sequence Approach, Paul Gulino calls a scene of Preparation "an important tool that can greatly enrich an audience's experience of a film...which is explicitly designed to create an expectation in the audience - usually Hope and Fear (see Week Two and the definition of Tension)...These are scenes that can often be cut without affecting the plot, but they greatly enhance the emotional impact" of an important event in a film.

Later, Gulino writes that a scene of Aftermath "provides punctuation in the story, lending emphasis to certain important moments. They inevitably follow emotionally charged scenes, and are usually characterized by little or no dialogue or activity, and are heavily atmospheric, often enhanced with music." 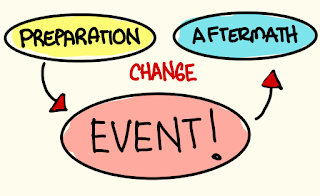 A famous screenwriting saying goes: “Tell your audience you’re going to do something and, afterward, tell them how you did it.”

Preparation could be anything from the planning before a heist to an athlete practicing to the point of exhaustion before a big match. In these cases, the Aftermath scenes might be the criminals celebrating a successful caper, or the athlete facing the disappointment of a loss.

In general, we don’t want to jump right into an important event; we want to be with our characters as they plan, worry, dread, predict, avoid, and eagerly await what is coming. And afterward, we want to see how much this important event has changed them or their surroundings. Often the audience needs a moment to "take in" what has happened and to understand the consequences.

So, scenes of Preparation heighten the Tension by triggering Hope and Fear in the audience as they imagine a future event going well or going badly. Scenes of Aftermath dissolve tension as the audience catches their breath, and comes to terms with an event that may have unfolded in a way they didn't anticipate.

The long briefing for the Osama Bin Ladin raid in Zero Dark Thirty is an example of a Preparation scene. The somewhat muted celebration after the team comes from the operation is an example of an Aftermath scene. In The King’s Speech, King George and Logue warming up to the climactic speech is a Preparation scene. The uproarious success of the speech as the crowds salute King George is an Aftermath scene.

In short films, there is often only a single "event" that occurs near the end of the story. Most of their running time is spent building anticipation with scenes of Preparation for that single coming event. Here is one example, in which a man asks his friend to do something for him, and the short builds more and more tension as the time comes for the friend to actually do it. The last comic bits of the piece surround the unexpected aftermath.

In a longer example, the short film First Match, notice the multiple scenes of preparation leading up to a girl's first wrestling match. Notice how the final scenes of Aftermath are handled with minimal dialogue and thick atmosphere.


Many of my students this semester have experience in the arts: music, painting, architecture, dance, and so on. In all the arts, establishing a pattern (a melody, a rhythm, a set of movements, and so on) creates a set of expectations in the audience. As that pattern repeats itself, the variations can create surprise, delight, shock, and further expectation for the next cycle.

The same is true of narrative storytelling. In this short film, "Black Hole," a man reaches into a hole over and over again, with various intentions, various results, and an ultimate consequence.


Another one to watch for Repetition with Variation is Standby by writer/director Charlotte Regan. The four minute short is a series of scenes that all take place in the front of the same police car - essentially the same shot repeated again and again over time to explore the friendship between two police officers.

Next week I'll be lecturing about Character, specifically how to create and establish compelling characters in a limited time frame. Please respond in the comments if you have questions or suggestions! For the previous classes, check out:

And the subsequent classes...

For more on screenwriting and filmmaking in general, check out:

I like the idea of using plant and payoff to write short screenplays! I've been trying to shove my story into the Save the Cat beat sheet and it hadn't been working so well. So I'm really excited to try using couple props as a plant in my short and then transforming the meaning of that plot during the payoff :)

I had been trying to fit my story into the beat sheets made for feature films and found that it doesn't work so well. So I'm really excited to explore the idea of plant and payoff for my next short film! I'll be using props as a plant and transform its meaning in the payoff :)